Fatman and Robin go to Cineplex and Deverse, Premier Etage


Fatman and Robin made it to Cineplex and I even had success downloading some photos from my phone. 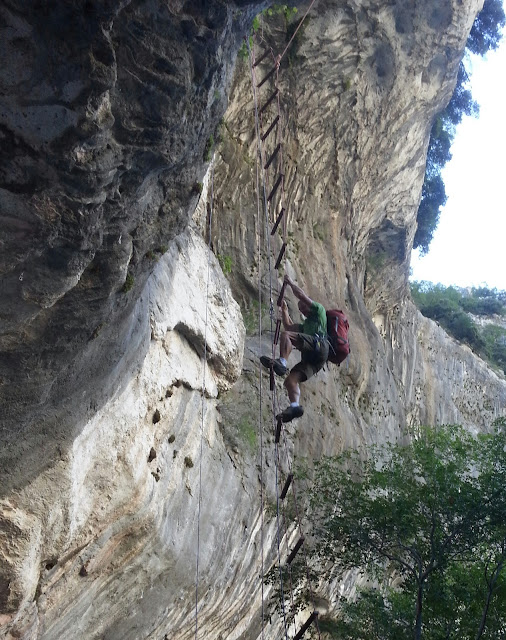 This is Robin climbing up the in-situ ladder to get to the upper secteur at Deverse. 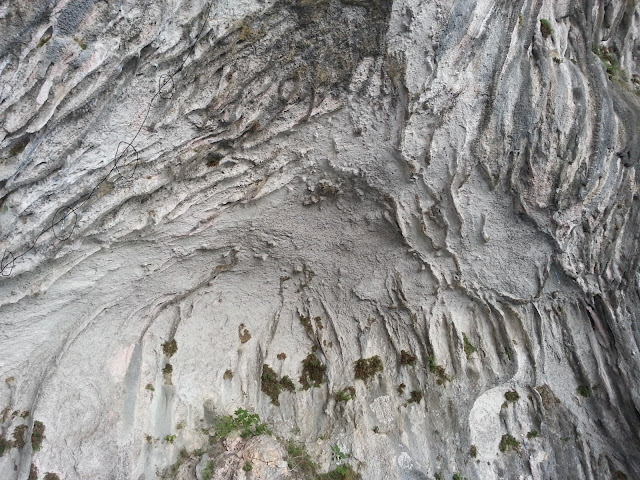 A section of the cliff: tufa paradise! 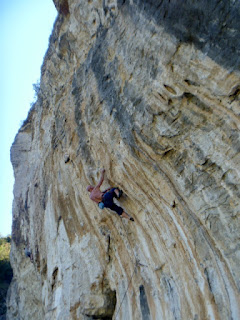 We chose America Oggi because it had some really nice looking tufas low down. They proved quite straight forward as the climbing above was mainly on slopers. We were both spat off the slab, taking some great whippers in the process! Robin was successful on his 1st redpoint whilst I took to the air near the top and stripped the draws. We then did 21 Grammi, which suited us much better.

After a Wednesday afternoon at Jurassic Park with Elaine, doing some mileage (including the link up of Diplodocus and the finish of Queue du Diable again), Robin and I made it back to Cineplex. After I made good use of a kind Italian's draws on America Oggi, we both got stuck into a couple of 8a's that we'll have to go back for....... 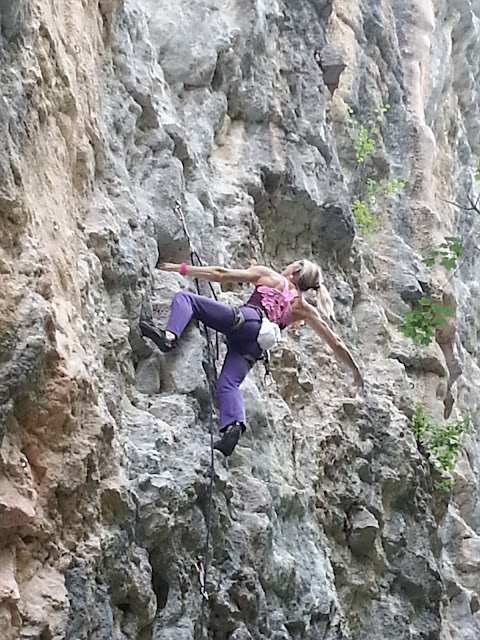 Marie-Jo on a 7a at La Phasme. 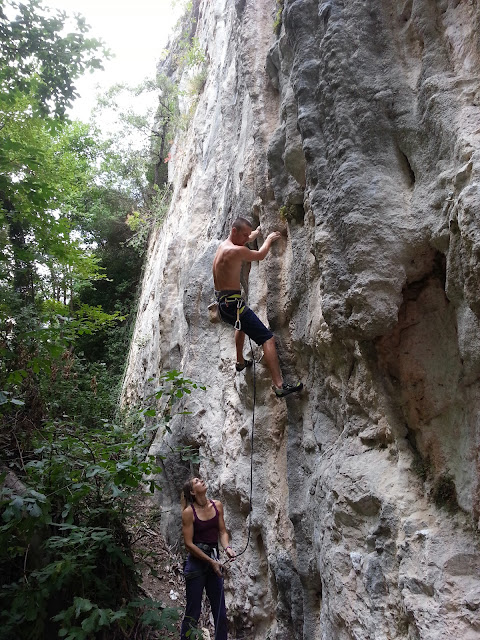 The Dream Team in action!

This weekend saw Elaine and me climbing in the Gorges du Loup with Marie-Jo and Julien (as we were not keen on the drive to Italy). Saturday at La Jungle and Sunday at La Phasme. Both days were great fun with lots of on-sighting and plenty of laughter too. Unfortunately, Elaine's finger is really hurting her these days. She goes to the specialist this Thursday, after which she'll probably be told to take a long rest. Hopefully, she'll be able to give me a belay at Cineplex next weekend!

Fatman and Robin get high at Deverse

I really hate computers. I've just spent an hour and a half trying (unsuccessfully) to transfer some photos from my phone to my laptop and trying to get to read my emails. The problem is me, of course, as I'm not the most computer literate of my generation. I know this and yet it still doesn't prevent me from really disliking computers. If I see another "server not found" tonight this laptop will meet its maker, I promise!

Still, I'm pleased with today. Elaine filmed me on the classic Cayenne recently and last night I saw the result. I was shocked at what I saw. Not because of the ease at which this old giffer made it look (despite not having done it for a long time) but because I look so fat in the video. Now, I've never looked good in a harness, due to being short and wide. But, come on I've been baring my torso/flab down here for over 13 years in all kinds of weather (as I'm a hardy Brit) but nobody told me to cover up as the sight wasn't pretty! 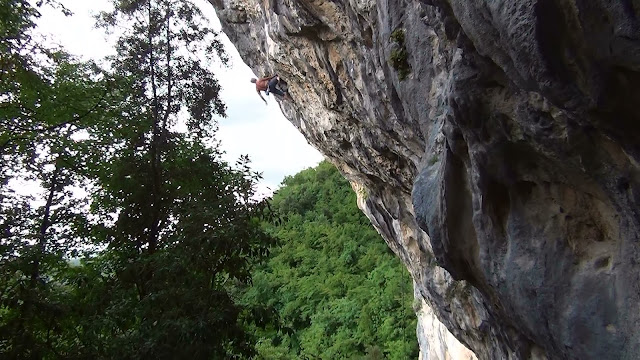 A more acceptable still from the Cayenne video.

So, I found an old vest to cover up today (especially as my climbing partner, Robin, is very lean and ripped, but he is nearly 20 years younger than me) and save the embarrassment for both of us. Now I did get lean when I was psyched for Mortal Kombat and Barjoland a few years ago now, but many beers and pain aux raisins have gone down the hatch since then. So, I was determined to stay covered today.

Chosen destination today: the new and very steep secteur above Deverse (in the fabulous Gorges du Loup) equipped by Ben Guigonnet. I was already sopping wet by the time we'd done the 5 minute walk in. Still, keeping a brave face, we climbed the vertical free-standing ladder and jumared up to the base of the climbs, leaving Scamp attached to a convenient tree at the bottom to sleep away the day.

Once we'd found the topo in a jar, Robin set off on the "voie de chauffe", a 7a+ on the right. He is much quicker than me to get geared up so takes the first lead and establishes the climbing order for the day. He doesn't realise its a ploy on my part to have the draws in and get the beta too!!!! Turns out to be a nice route which will improve with traffic.

Next up, we decide on a very steep 7b+ covered in tufas. Robin goes first of course, but misreads a move right and takes a hang. He continues to the last draw and takes another hang before reaching the chain. My turn. Now, if there is a knee bar to be found I'll get it and there are plenty. Getting the flash was very pleasing, albeit hot in my vest. Robin got it easily next go. However, the order has now changed. Mmmmmm, maybe not a good idea, perhaps I should have fallen just before the chain!

So, what next? its my turn. We both fancy the 7c which leads to the same chain. I scope the moves and work out its hard low down then lots of tufas and knee bars. The onsight goes well, apart from a scare when both feet zip after the crux. Robin benefits from my beta and makes it look easy. Both of us are grinning like young fools!

There's still plenty of gas left in both tanks for a look at the 8a on the right. My turn to go first again and work it out. However, both of us bloc at the bouldery crux and continue to the chain and then we're content to call it a day. We rappel back down to Scamp and walk back to our vans and go our separate ways, both absolutely chuffed to bits. I even managed to get an hour in the sun at home. 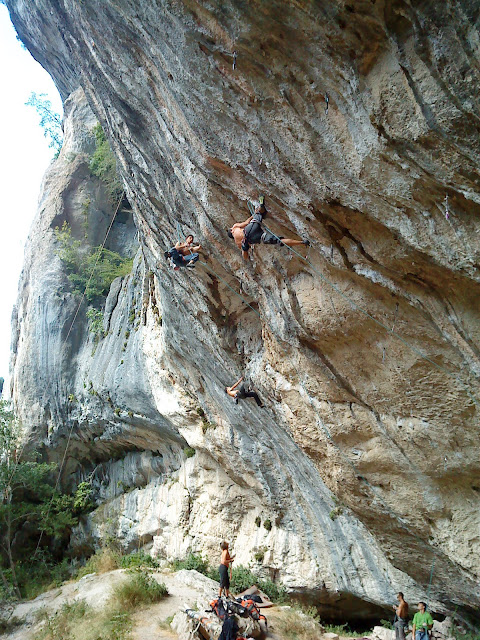 Ben Decoster on Soul Sacrifice at Deverse "original", taken a couple of years ago. Today, we climbed at the higher secteur just appearing top left.


Saturday we plan to go to Cineplex in Italy for the day and check it out. Bring it on. I'll be there in my vest again, doing my bit for the crinklies!

Been there, got the T-shirt

It's a Wednesday today. Normally, I would be out climbing with Elaine. Probably at Jurassic Park (as it's close to home and handy after work; we don't work afternoons on Wednesday's). However, I dropped Elaine off at Nice airport a couple of hours ago. She has gone back to Preston for a family funeral.

So, Scamp and I went for a walk in the forest up the hill behind our house. Scamp and I know this walk off by heart, as we've been doing it together for nearly 10 years now. We always enjoy this beautiful walk and the stunning view of the Gorges du Loup from the top. We go out in all kinds of weather and we never get bored: Scamp carries a stick and marks her patch whilst I contemplate the meaning of life, the universe and everything. You see, I used to do the same walk with Merlin (Scamp's predecessor) and old habits are hard to kick.

This year has been a pivotal time in my life. Elaine and I have both had to deal with my 2 year depression. Sadly, I lost my father in February and in April I had an operation in my mouth (due to a mistake by a dentist from which I may possibly never fully recover). As a result, I am now very much aware of the passage of time and the fact that, in the grand scale of things, we are pretty insignificant indeed. But, hey, today I came to the conclusion that I can cope with that. Such is life and I'm one happy little chappie.

Anyway, starting last week, I am now working part time. Yippee! So, why didn't I go out climbing with friends after dropping Elaine off? Well, that's because I'm going out tomorrow you see! Robin and I are going to the new secteur at Deverse. Hopefully, I'll get some photos to share.

I used to have an ace T-shirt (dating from the time when I was sponsored by DMM in the nineties) which bore the lifestyle logo of "Climb now work later". During the past few years I haven't been able to follow that lifestyle freely. Now (as my depression is now under control) I feel like a burden has been lifted and I can get back to normal again and start thinking about climbing now and working later. 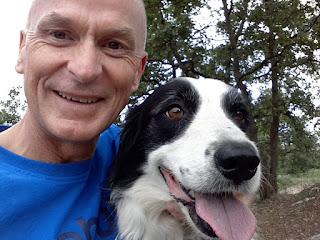 A couple of days ago, I noticed a post from Duncan McCallum about a poem written by an old man and found after he had died. It was so poignant as it spoke about how he felt so young and sharp inside whilst young folks just assumed he was senile and worthless.This kind of made me think about the current generation of young climbers who appear to forget about the great things done by previous generations. For example, in the nineties there were many climbers regularly (and modestly) ticking the hard routes of the time without seeing the need to make any big deal about it. So, why is it big news on UKC when somebody does Raindogs or Predator and so on, as such routes were already established trade routes well over 20 years ago? Maybe, these climbers are just blissfully unaware. It seems that everybody wants to be sponsored and become famous. I say get a life and just climb, who cares.

Anyway, shut up and climb.