Well it's the February half term holiday. We had been planning on heading off to find the sun for a week. However the weather across all of southern Europe is either already crap or is soon going to be crap. So there's been nothing else to do other than stay at home. In fact the weather here the next couple of days is going to be very cold, so we've stocked up on food and wine so that we won't run out in case things get really bad.

The shoulder has been really improving and I'm almost back to 100% fitness now. We haven't been climbing outdoors since Christmas (because of the weather and a lack of anything new to do really) but we've both been really enjoying bouldering indoors, especially at Art Bloc, which has recently expanded and doubled it's surface area. We love Art Bloc, it's where we started to meet local climbers when we first arrived here in 1999, the blocs are always interesting and varied and are much more in keeping with real climbing than the other climbing gyms down here, ie. it's not just about jumping around from one slopey volume to another. I have to say that I find the bouldering at Val de Grimpe and Bloc Party too physical on my shoulder and very dis-heartening, to me there only appears to be two grades: too easy or too hard. Art Bloc is perfect for us, we feel so psyched after each session and can't wait to return. Thanks to all the team at Art Bloc for creating so many interesting and varied blocs, thanks for such a great job and keeping us motivated.

I've been scratching my head for some ideas about trying to write something interesting. There hasn't been any real reason to write a blog since last summer as we haven't been up to much. However I have had an idea, so let's see how it goes.....

Sometime during my first year of teaching we noticed a note in the Climbers Club newsletter advertising grants available from an organisation called The Winston Churchill Travel Fellowship under the category of Exploration and Adventure for Women. We got thinking and came up with an idea of the two of us investigating why French women rock climbers were so good (they were at that time the best in the world, eg. Catherine Destivelle and Isabelle Patissiere). Our plan involved a nine week trip during September and October, travelling to lots of different climbing areas, interviewing lots of women climbers, oh and doing as much climbing as we could. Elaine put in an application and was invited down to London for an interview. She was full of a cold and set off on the train. She was interviewed by a panel that included one of my childhood heroes, 1964 Olympic long jump champion and fellow Welshman Lynn Davies CBE and Dame Naomi James. Apparently they were very impressed with her thorough planning, and making the effort to travel to London whilst ill, that she was awarded a very substantial grant which would be more than enough for our frugal lifestyle. As I had only just started teaching I would have to quit and hopefully find another job when we returned. So I finished off my probationary year and resigned. My neighbour told me about a vacancy (due to maternity leave) starting in the November in the science department at his school. I was interviewed and got the job. We couldn't believe our luck. All was sorted and we could hardly contain our excitement that summer, way back in 1991. Elaine's old school mate and our best man, Phil Ralph, decided to join us and we eventually headed off at the end of August in our old Citroen C15 van.

First stop was Fontainebleu and sight-seeing in Paris, it was really very hot. I can remember the taxi driver stopping in the middle of the L'Arc de Triomphe so that we could take photos, cooling off around the fountain outside Le Louvre and also ordering steak tartare, because it was the plat du jour and sounded good, in some restaurant, which we politely declined to eat. Elaine had put a note in the French magazine Vertical and she'd received some replies, including one from Isabelle Lucet-Juchault, who'd told us about a fantastic cliff called La Guignotrie, near Poitier. It was good to escape from the heat and start to do some proper climbing. We had a great time there, the climbing on the overhanging pocketed walls was amazing and we enjoyed staying at the peaceful campsite in Angles sur l'Anglin, until somebody stole Elaine's clothes off the washing line! We headed off to Saussois and just about managed to hang on long enough to do the polished l'Ange but couldn't touch Chimpanzodrome! Next stop was a new cliff that we'd just started hearing about called Ceuse. Ralphy and I felt like we'd discovered paradise and we couldn't understand why Elaine didn't quite feel the same way. At that time we were young and fit and hardly noticed the long walk, we'd already be stuck into something at secteur Cascade, by the time she'd arrive. Despite the awesome climbing, we ended up leaving Ceuse far too soon and headed for the valley crags in Briancon, which involved shorter walk-ins. I was gutted when we saw how small and scratty looking the crags were in comparison. We persevered for a few days and then headed further south to Orpierre, where we bumped into Paul Pritchard looking very cool in a nice pair of Vuarnet sunglasses. He told us how we needed to get some decent sunglasses to try to decrease the risk of getting retina cancer. We soon headed off to Buoux, which we'd already visited (along with the Gorges du Verdon) some years earlier. We ended up spending the rest of the trip there and having a wonderful time, despite struggling with the pockets. We took note of Paul's advice and all three of us bought a cool looking pair of Vuarnet's to help us cope with the endless Provancal sunshine, whilst on a rest day in Apt. We also visited Volx on a rainy day. Upon arriving at the crag I walked up to a young, fit looking climber and in my poor French asked him "Est ce que vous avez un topo?", to which he replied "Non, I don't need a topo" but he proceeded to tell us the climbs and grades. When we later saw him running up everything we realised he was non-other than current World Champ Francios Legrand! We became good friends that trip. We also met up with legend Catherine Destivelle underneath Styx Wall at Buoux and Elaine was able to put her name on the research that we carried out.

All too soon our time was running out, we still had loads of unfinished projects but we were definitely becoming jaded after doing so much climbing, so we started looking forward to returning home and slotting back into our normal lives again. We'd had a fabulous time, although we hadn't been to lots of the places we had hoped to, mostly because it was pretty hot and it wasn't yet winter. We left Ralphy to climb with Big Mick Johnson and we headed north. Upon returning, we both started teaching again and Elaine published her research and gave a slide show for the Winston Churchill Travel Fellowship. Surprise, surprise, it wasn't rocket science, she concluded that a combination of so much available climbing all year round, the emphasis on sport climbing, great weather, a long established positive attitude towards sport as a whole and by encouraging children to start climbing at a young age, it was understandable that French Women Climbers were at the cutting edge of our sport.

Thanks to the Winston Churchill Travel Fellowship we were able to get a wonderful taste of the French way of life, and that trip turned out to be the start of many adventures during the next eight years, culminating in our eventual move across the Channel. We've never looked back since! 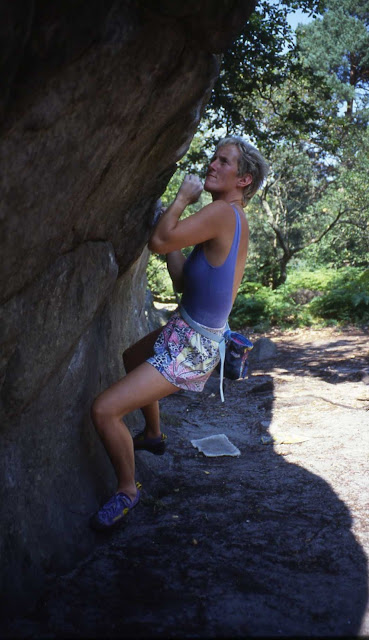 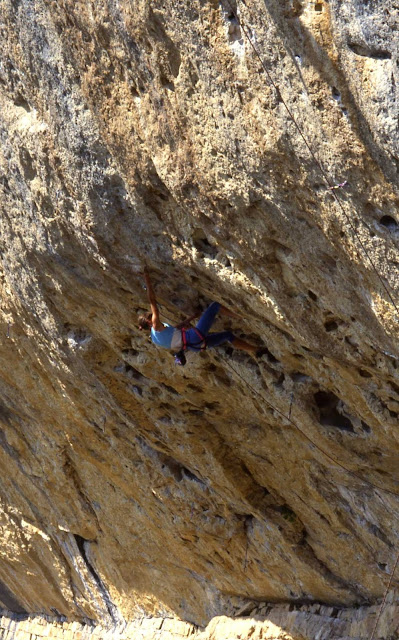 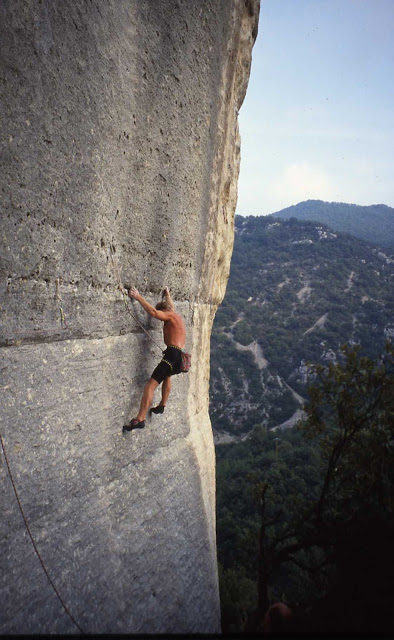 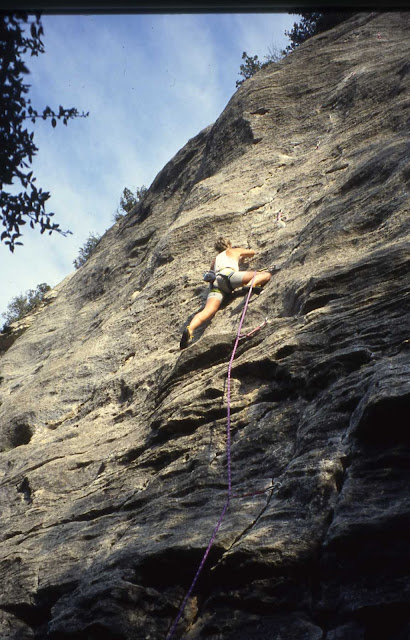 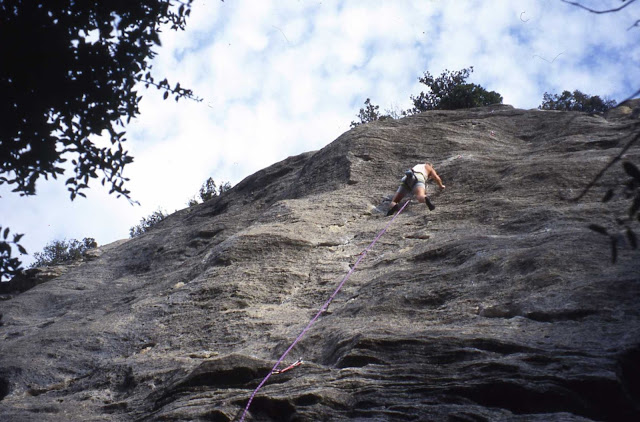 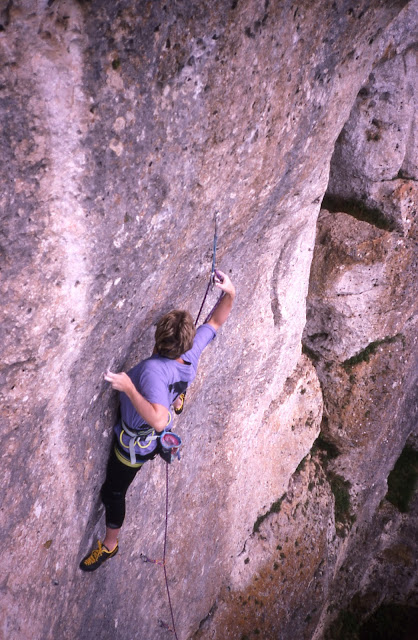 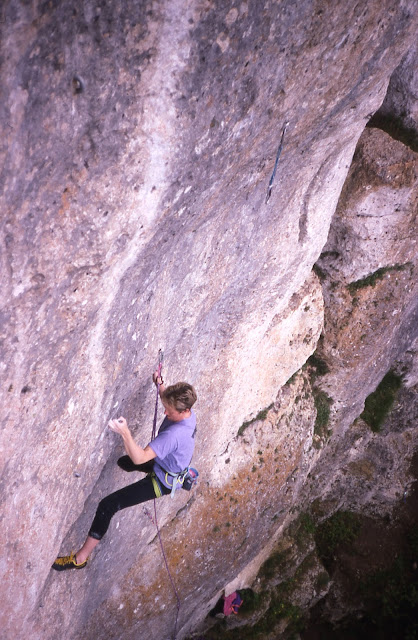