Meeting up with Steady Eddie and The Sun Goddess again

As I write this, we're having a brief respite from a long period of heavy rain during the last 48 hours here in the south of France. It's forecast to continue raining up until the weekend.....

It's just as well that we made full use of the last couple of warm and dry weekends to do some climbing with our friends Eddie and Mandy Martinez from Britain. We met up at Courchon and the crag was in mint condition. This weekend we met up again and climbed at Jurassic Park and Cayenne (on Saturday) and St Cezaire on Sunday, all crags were more or less dry (though there were some damp holds in places). It was great to see them again after so long. It was also a chance to test my re-soled shoes (thanks Marie-Jo!).

Couldn't climb outside today, so had a great bouldering session downstairs. Unfortunately, the crags will probably start seeping now, shame but that's the way it is..... 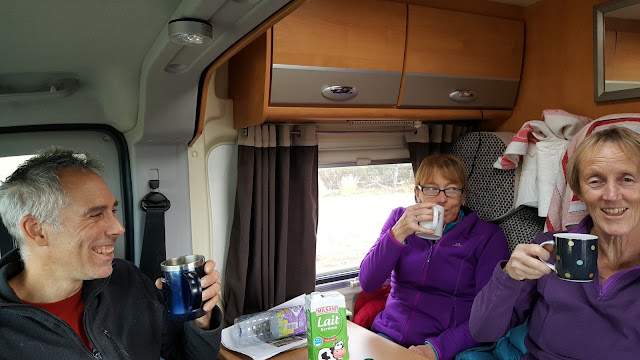 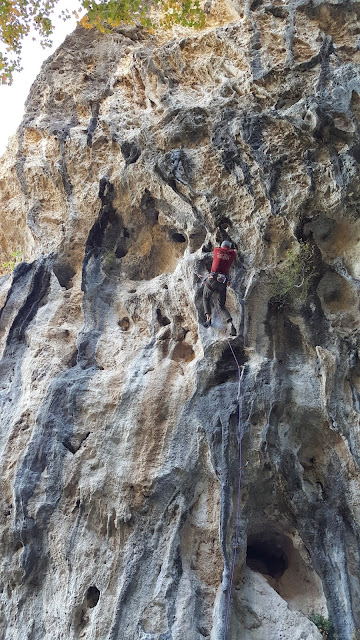 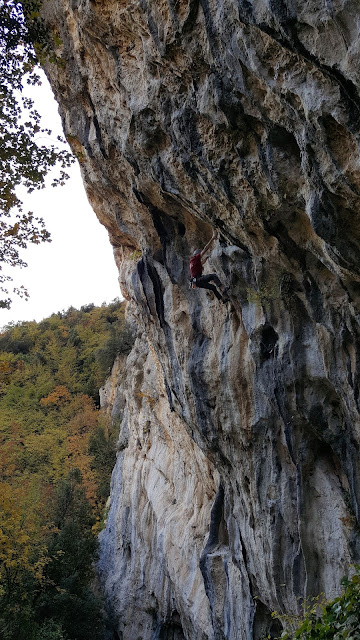 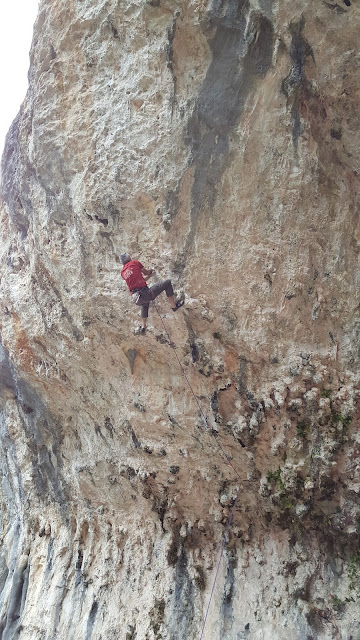 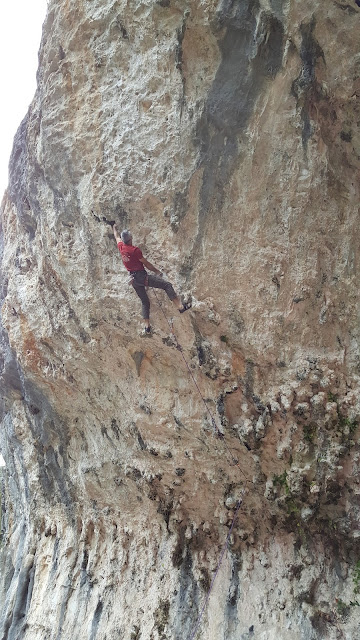 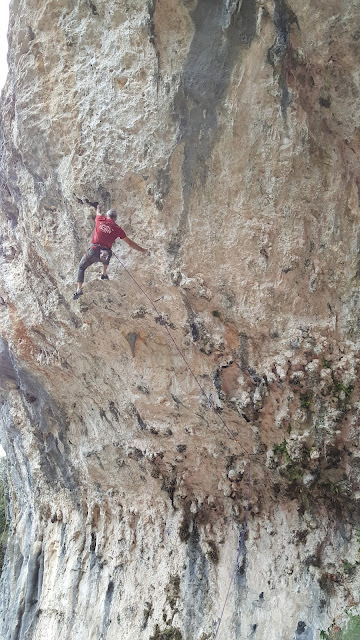 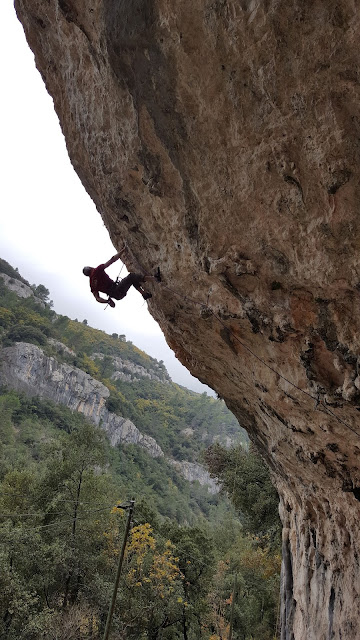 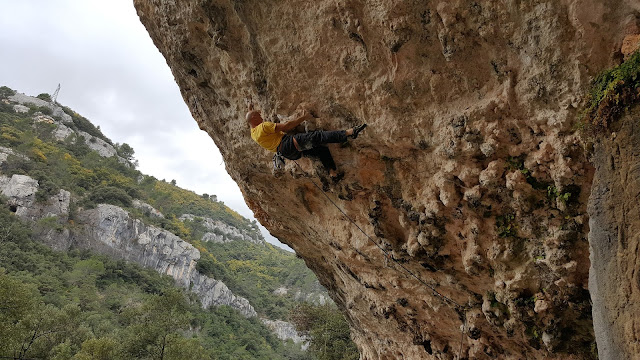 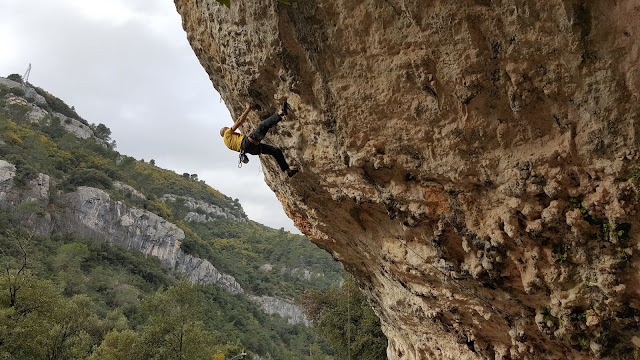 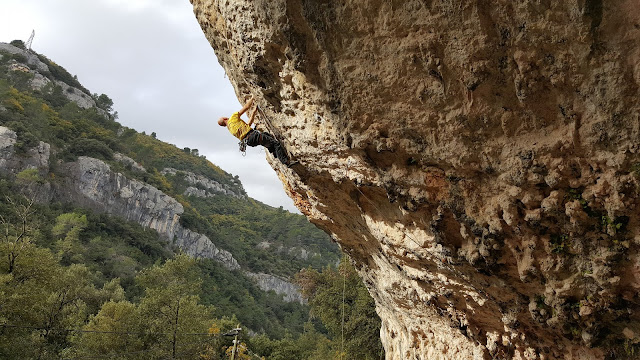 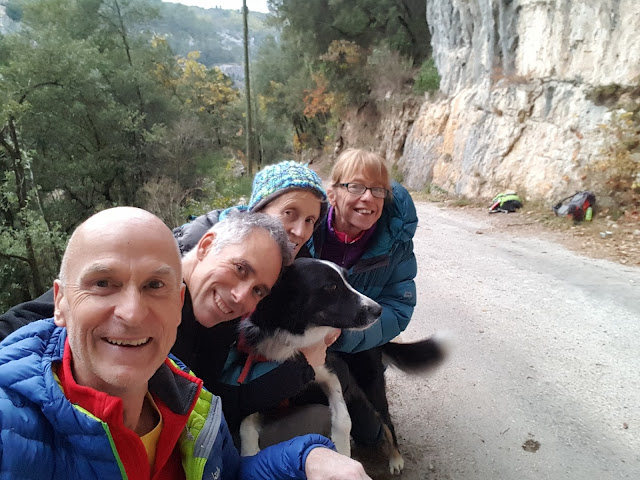 I couldn't help it, I was just so frustrated and the floodgates opened. 58 years young/old and I was crying at the crag. Big, full-blown sobs straight from the heart. Sponge Bob Square Pants reduced to tears. FFS!

Back at work you spend the whole week longing to get out climbing. You've been doing some training to try and get a little bit better, but it's wearing you out and your fingers are really tired. If you've got a project you're mentally worn out too, because it occupies your thoughts most of the time you're awake and you keep going through the moves whenever you've got a spare moment. Then you finally get to the crag (an adventure in itself when you're going to La Ramirole with a dog). The conditions let you down, it's too humide and you trash your skin on your first attempt. The weekend's already finished for you, that's it. Back to work and go through all that aching and longing again, until the next weekend.

That more or less sums up how I've been existing for over 40 years. I have absolutely no regrets and have had a fantastic time trying my best to claw my way up cliffs pretty much all over the world. However, I've got to a stage where it's getting really, really hard to keep motivated. Quite simply, I'm getting too old and am struggling on stuff I used to run up. Plus I'm always the punter at the crag these days and my projects are the warm ups! I'm OK if we're at a quiet crag but I really hate being the weakling at La Ramirole.

I don't feel like doing any more training, I've had enough, and I don't feel motivated to go back to La Ramirole, despite feeling close to doing my project (if only the conditions and my skin were good enough). Then again, you never know..... Maybe I should go downstairs and pull my finger out after all. Come on. 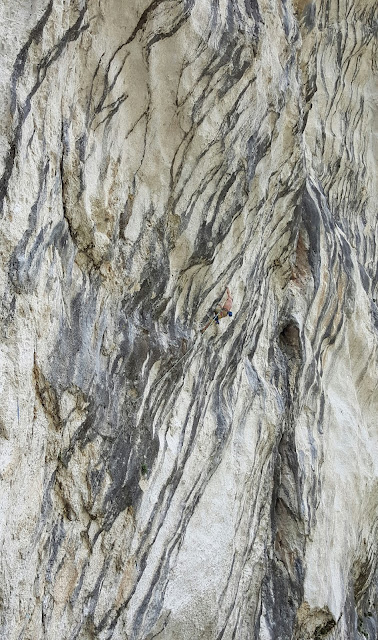 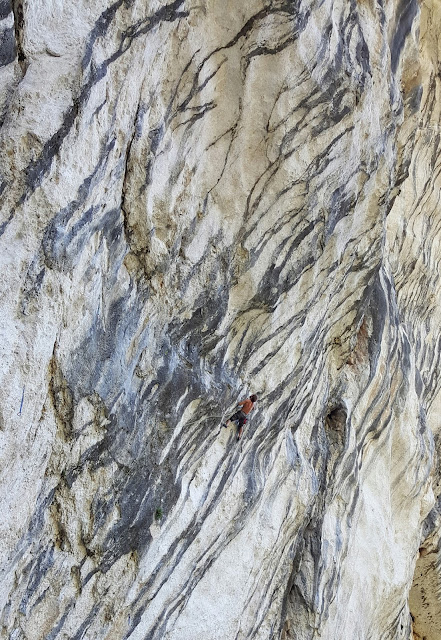 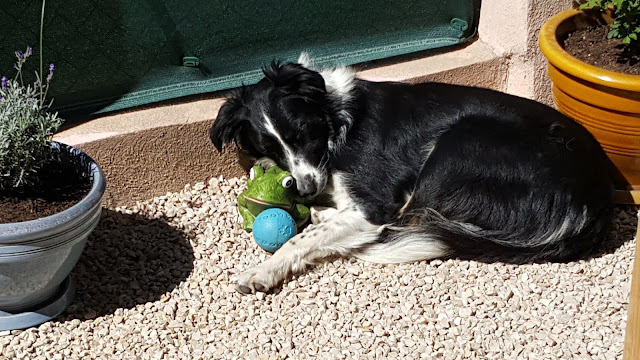 It all started with a message from Maxime Clerc (1). You see, he's a local climber who is a teacher with the same holidays as us, so he usually gets in touch to try and tempt us to climb wherever he is. Last year it was La Ramirole; we didn't take him up on his offer, partly because Maxime climbs so much harder than us and we thought he wouldn't really like to climb with us punters. However, this year he was in La Hermida, in Cantabria (Northern Spain) which we visited 2 years ago and had such a good time that we always wanted to go back again sometime.

The same day there was a new "Destinations" article on UK Climbing titled "Into The Valleys" all about the climbing in Asturias and Cantabria. We got in touch with Richie Patterson (2), author of the excellent "Roca Verde" topo and we were hooked by his enthusiasm (especially after watching the video of James Pearson on an amazing double tufa rail called "Dimensiones Paralelas" at the reasonable grade of 7c+). We headed off on the long drive west.....

We met up with Maxime. He took us to a newly developed cave called Cueva Hermida where he was trying an 8b+. The climbing there was, unfortunately, too hard for Elaine, but I managed to do two really good 7c's. Maxime had 3 good goes but had to leave for Onate without doing the 8b+.


Next day we went to another newish crag called El Infierno where we got shut down by the warm ups! Elaine found Malas Pulgas tough and intimidating, whilst I fell off Panificadora, expecting a nice 7a+, which actually proved to be wrongly graded (it is in fact a tough and run out 7b+). The high light of the day was bumping into an old friend from Granada called Javier Morales (3). We first met him in Yorkshire in 1990 with photographer David Munilla (he did things like The Oak way back then in the middle of summer with minimum fuss!). We have bumped into him many times at El Chorro and even in the Gorges du Tarn over the years, he is still climbing really hard. Also there that day was Mariona Marti (4), who we already knew from a previous visit to Onate.

Next on our list was the immense cave high up the hillside opposite Cicera called Cueva Carcalosa where we got stuck into La Deriva (7a+) and the fore mentioned 40 metre classic Dimensiones Paralelas. Elaine made good progress on the former and I should have finished the latter in a day, however I fell off high up and then twice much lower down like the punter I am. It was worth the long walk next day to finish the job, despite really sore skin. It felt awesome to climb such a king line, it was even better than it looked in the video. We also got to tick off two really big names: local equipper Alberto Hontavilla (5) and Dani Andrada (6). By the way, Iker Pou (7) spent a couple of nights next to us where we were parked up. Just saying!!

We continued having fun going to different crags and climbing some amazing tufas and we moved onto an excellent and friendly campsite (La Isla at Turieno, near Potes). Ruff was so happy when we were joined by her favourite uncle and auntie, Dave Cross (8) and Rhian Cross (9). Pete Chadwick (10) arrived pretty soon thereafter, ensuring that he had us all splitting our sides laughing at his jokes and stories from his "Porky and Tonks" scrapbook, even if we'd heard them before....... erm, lots of times! Later additions to the team were super stars Neil Mawson (11) and Tanya "Traverse of the Gods" Meredith (12). Brief appearances were made by Jonny Garside and his wife Becky and also Marina from Chulilla.

Back to the crag and the real purpose of the trip: ticking. El Infierno continued to feature well (Adam Pustelnik (13) ticked, along with Estraguena (nice, soft grades or what?). A day at Cicera proved too hot for climbing but very good for ticking a plethora of celebs: Javier (again, so doesn't count twice), Olivier Fourbet (14), Yann Ghesqiuers (15), Jean-Luc Jeunet (16), St Leger equipper par excellence Franck Vilpini (17) and I think (though I'm not 100% sure) Alizee Dufresse (18). I should add here that, once we'd given up trying to climb, the Chadster and I watched/drooled over a lovely young scantily dressed grimpeuse from Chambery who made an 8b look very easy on her 2nd time up (please don't hit me again Elaine!).


After more than 3 weeks in La Hermida we decided to head to Teverga after promising reports from Neil and Tanya, despite our sentiments after going there last year. We were woken in the middle of the night by a huge horse with a blond mane, rubbing against the side of the van and Pete's car. It was hilarious watching the Chadster trying to shoo it away from inside his hearse! I can't repeat the rest of the story here....


Next day proved too much: hot and sweaty at the not very impressive cave of El Covachon, but we did meet up with Pierre "Kairn/Fanatic Climber" Delas (19) and Mr Greenspits himself Antonin Rhode (20) slowed down by a broken heel but climbing well nonetheless.

Conclusion: an awesome 4 weeks "ticking" and having great fun with an ace bunch of friends; great climbing with favourable summer temps. Next July we'll be back.